In this week’s Roar, we have the threat container congestion poses to Christmas, retailers on track to use more than one-third of their space for e-commerce fulfillment, floods in Europe and China, a rebound in trans-Atlantic trade, and a cyber-attack in South Africa.

With retailers restocking inventories and consumer demand gone wild, worldwide container congestion is on a whole other level right now. According to Bill Simon, former CEO of Walmart, “one of the most important aspects of an effective supply chain is the ability to flex the system to adjust for potential disruptions.”

And if the current market conditions or rampant outbreaks of COVID-19 don’t seem overwhelming enough, the recent floods in China and Europe ought to do the trick. While the international shipping industry is no stranger to massive disruption, it’s definitely not thrilled to take on the heavy flooding that has “devastated parts of western Europe” as well as the landlocked Chinese province of Henan, based on a recent CNBC report.

In other news, the accelerated growth of online sales in the U.S. that occurred this past year and a half has paved the way for retailers to work toward dedicating more than one-third of their space to e-commerce fulfillment in the next couple of years. According to Supply Chain Dive, “by 2023, 34.8% of retail by global chains will be online, up from 30% in 2021, rising to nearly 40% by 2025.”

At least there’s been a rebound in trans-Atlantic container trade after U.S. and European economies began to reopen. According to PIERS, “total containerized volume between the United States and Europe rose 7.4 percent in the first five months of 2021 compared with the same period a year ago.”

Lastly, issues with cyber-security continue to impact the industry, this time in South Africa. Thankfully, ports across the country have resumed operations. The attack, however, forced Transnet to declare force majeure at its container terminals, according to the Ministry of Public Enterprises.

To learn more about this week’s top international shipping news, check out the following article highlights: 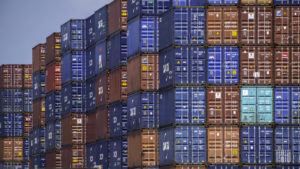 Warning: Book now or ‘Christmas may be canceled’ 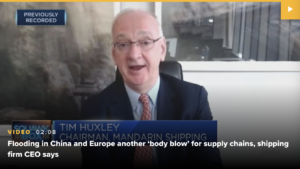 Global shipping industry disrupted again, this time by floods in Europe and China

Shipping has already seen massive disruptions this year like the Ever Given running aground in the Suez Canal and delays stemming from an uptick in COVID-19 cases near ports in southern China.

Retail stores on track to use one-third of their space for e-commerce fulfillment by 2023: report

E-commerce, already on the rise when it was propelled by the pandemic, could lead stores worldwide to dedicate as much as a third of their space to online order fulfillment. 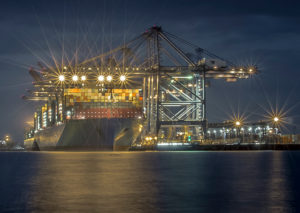 The reopening of the U.S. and European economies after last year’s COVID-19 lockdowns spurred a resurgence in the trans-Atlantic container trade. 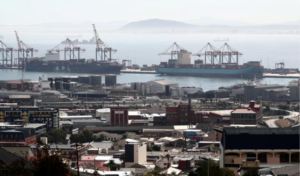 This is the first time the integrity of SA’s critical maritime infrastructure has been severely disrupted.